In this project, I will research how the location of the brick in LEGO cars affects how fast they go down a ramp. I think that the wind resistance will make the speed of the LEGO cars the same no matter what the design is.

For the experiment, I made a ramp out of three books. The ramp was 6.1 cm high and at an angle of 13 degrees. I measured how long it took a LEGO car to roll from the top of the ramp to a finish line about 30 cm from the ramp. For the experiment I made three LEGO cars using the same bricks. Each car weighed 35 g. Car 1 had most of the bricks at the back. Car 2 had most of the bricks in the front. Car 3 had most of the bricks in the middle. I measured the time it took for the cars to go down to ramp to the finish line four times each. I found the average for each car and compared them. Pictures of the cars and the ramp are below. 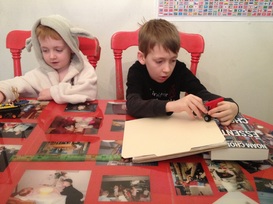 I think it turned out differently than I thought because they were not close in speed.